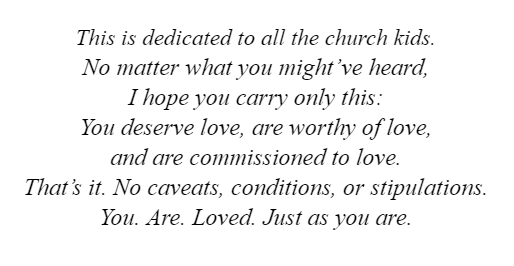 This is really the dedication to a 2021 young adult book published by a big 5 publisher. It sets the tone for the whole book. IYKYK, as the kids say. I was a church kid my entire childhood and well into adulthood, really.  I was such a church kid. And I wasn’t ready for Erin […] Publisher’s description Put an atheist in a strict Catholic school? Expect comedy, chaos, and an Inquisition. The Breakfast Club meets Saved! in debut author Katie Henry’s hilarious novel about a band of misfits who set out to challenge their school, one nun at a time. Perfect for fans of Becky Albertalli and Robyn Schneider. When Michael walks through the […] Publisher’s description It’s Kind of a Funny Story meets Daria in the darkly hilarious tale of a teen’s attempt to remake her public image and restore inner peace through reality TV. The only thing 17-year-old Jane Sinner hates more than failure is pity. After a personal crisis and her subsequent expulsion from high school, she’s going nowhere fast. Jane’s well-meaning parents push […] Publisher’s description Joanna meets the perfect girl for her and must decide whether to break a promise that could change everything for her and her family or lose out on love in this charming young adult romance that’s perfect for fans of Julie Murphy’s Dumplin’ and Becky Albertalli’s Simon vs. the Homo Sapiens Agenda. Joanna […]