Background: Pokemon Sun and Moon are attractive to gamers who have been dedicated Pokemon fans since the beginning, as well as returning gamers who want to experience a game with more substance than Pokemon Go. First, you need to know that Pokemon Sun and Moon are actually two separate games, meaning you have to pay double the price for a set. While both games take place in the same universe, the difference is how Pokemon can be caught in only one version or the other, so for hardcore players who want to complete their Pokedexes, they need both versions of the game.

Single or Multiplayer: Both

Storyline:. Pokemon Sun and Moon take place in “Alola” which is a fictional version of Hawaii. Whether or not the game has culturally appropriated Hawaiian culture is up for debate on the internet, but people have been rejoicing that players can choose from a variety of skin colors and two genders.

As per Pokemon trope, the main character that players control is a kid who has just moved to Alola to catch Pokemon. This version has a new set of starter Pokemon, and players get to choose one before going off into the world to catch ‘em all:

Another Pokemon trope is to have a nemesis team, and Pokemon Sun and Moon’s enemies are probably my favorites. The nemesis group is called “Team Skull”, and they are both unorganized and goofy. Players “beat” part of the game by successfully defeating all of Team Skull’s members. 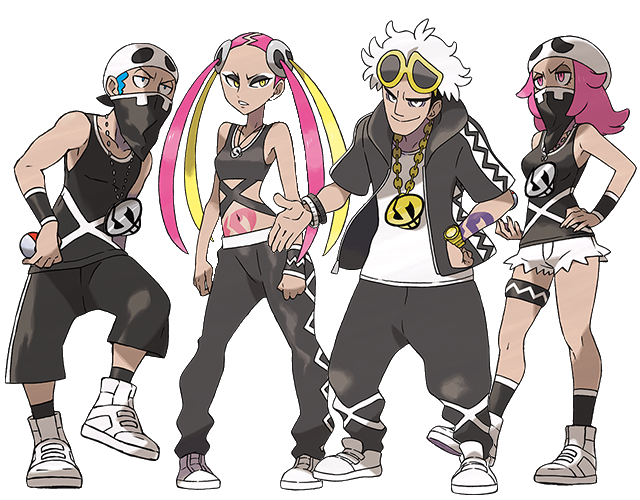 Gameplay: Instead of conquering gyms, Pokemon Sun and Moon gives players a variety of challenges, ranging from Island Challenges to smaller, non-combative challenges like retrieving items. This mix gives the game a breath of fresh air and a welcomed breakaway from the usual Pokemon game formula.

Another way to “beat” Pokemon Sun and Moon is to capture every Pokemon in the game. What makes the game feel easy is how players with a Wifi connection can go to what is called the “Festival Plaza”. There, players can pay extra currency to train up their Pokemon, dye their avatar clothing, battle other human players online, and trade Pokemon online. You can also scan up to 10 Pokemon QR codes per day in order to fill up your Pokedex. To old school players like myself, it seems like it’s almost cheating, but I can’t really complain because it means my Pokedex will be get to 100% much faster compared to when I played in the 90s.

The only part that I found disappointing is the lack of original Pokemon types in the game. Some of the new Pokemon look strange to me, but I can’t complain when my starter Pokemon was an adorable looking owl!

Audience: This game is for players who want to relive their childhood by playing a Pokemon game, but are also open-minded to the drastic changes in Pokemon types, Island Challenge structure, and online mode. Younger kids and teens should enjoy playing Pokemon Sun and Moon, especially if they spent the summer playing Pokemon Go.