This week’s video game is the newest edition of the “Paper Mario” series.  Paper Mario takes the classic 2D side scrolling game and gives it a role-playing feel, often with 3D elements and a paper aesthetic.  Mario usually has a hammer that can squish enemies, and as always he has to save Princess Peach in Mushroom Kingdom.

Storyline: Mario and Peach set out to a town called Prism Island, only to learn that the world’s color and characters have been drained by Shy Guys wielding straws.  The town’s color source used to be from a fountain that held Big Paint Stars, but the fountain has been drained and the stars are missing.  In addition, there’s a giant black paint version of Bowser throwing the world into chaos, and it’s up to Mario to save Princess Peach (who once again gets kidnapped) and restore the Big Paint Stars alongside his new sidekick, Huey the paint can. 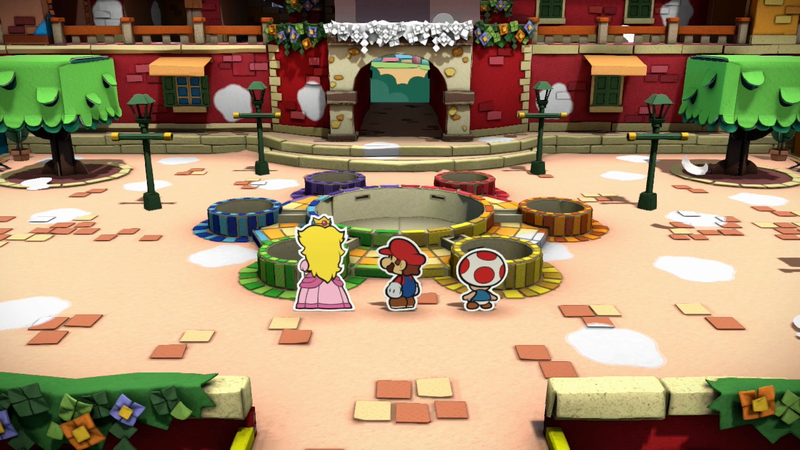 The storyline isn’t really fleshed out, nor are the rules of the universe.  There are parts of the universe that are graphically realistic looking, called “Things”, and the game gives absolutely no reason as to why they exist or why you can “squeeze” them into cards.  It’s a jarring experience in a overall beautifully crafted aesthetic world.

Gameplay: Mario has a nifty magic hammer that can soak up red, blue, and yellow paint.  By running around, players can smack whited out areas to restore their colors, hit enemies, and suck up more paint by smacking the natural parts of the world. 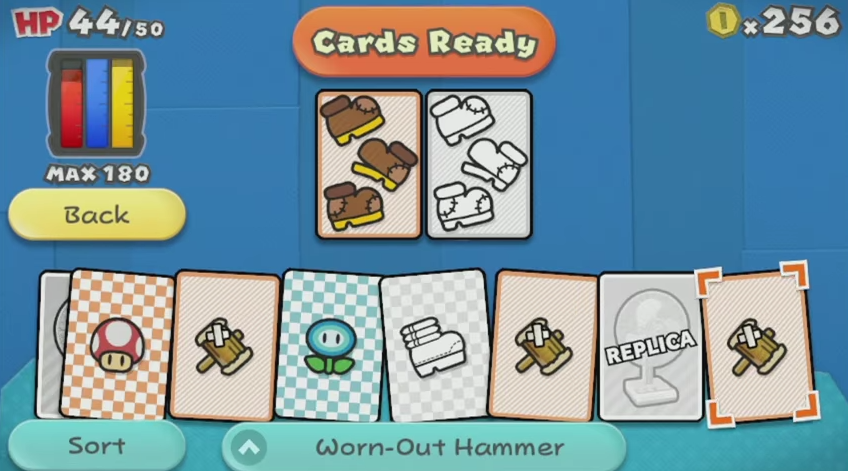 What do I mean by this?  Instead of a typical Mario game where players kill enemies by simply jumping on top of them, Mario has to select a series of cards like the ones above to kill enemies.  Players can choose up to two cards, and decide to boost their effects by using paint to color them.  After the player’s turn, the enemies take their turn attacking Mario.

In order to progress in the game, Mario has to find both regular Paint Stars and Big Paint Stars.  These stars unlock new areas in the world, which have their own subplots and obstacles.

Overall, it takes about four or five hours of gameplay to unlock each Big Paint Star, and there are six in total.  Despite the obstacles of each area being very intriguing, the unfortunate part is how the turn-based combat system just doesn’t work for me.  There simply isn’t enough variety in enemies and action cards to keep the game interesting, and you don’t need to plan out complex strategies in order to win.  I found myself doing everything in my power to avoid enemies as much as possible because I didn’t want to have to sit through another battle.

Audience: The game is meant for players who have enough patience for turn-based games, but even then fans of the  genre will be disappointed with the limited amount of strategy needed in order to succeed.  Next week, I’ll be reviewing XCOM 2,which is another turn-based game that might be more suitable for these types of gamers.

Verdict: The game is beautiful to look at, but players are better off admiring Tearaway Unfolded for the paper aesthetics, and should look elsewhere for turn-based combat games.  Secondary purchase for circulating collections.