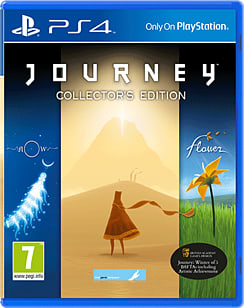 This review is going to be a little bit of a throwback because the original version of Journey  came out in 2012, but I hope you find it useful!  I’ve been waiting for our library’s vendor to stock the collector’s edition of Journey for PS4 (I don’t own a PS3), but I finally gave up and ordered a copy from Amazon.  I was not disappointed in the slightest.

Background:   Like I said before, Journey was released by the indie company ThatGameCompany in 2012 in the PS3 PlayStation store.  It became a cult classic and a huge success.  Journey won a ton of awards for many different categories like music score, Game of the Year, etc., but I get the feeling it flew under Library Land’s radar because it was initially released only on the online store, not on a disc.

The collector’s edition has two bonus indie games created by the same company: flOw and Flower. I played through all three games, but the main focus of this review will be Journey.

flOw: flOw actually was a game created by a grad student named Jenova Chen for their Master’s thesis.  The thesis is a real thing you can read online and try to understand if you wish!  Basically, the idea behind flOw was to create a game that both non-gamers and gamers can enjoy because they have complete control over the pacing of the game, rather than forcing players to go through levels they cannot handle.

You start the game as a cute little globby thingie (or “microorganism”, but I like my term better) with a U-shaped mouth.  It looks like this:

You swim around by tilting the PS4 controller to the left and right.  Your goal is to eat smaller things that float around.  When you eat something smaller, your globby thingie evolves into something bigger.  You can progress to more difficult stages and attack other globby thingies along the way.

The controls are pretty hard to grasp because you can’t re-calibrate the controls once you start the game.  Once you get the hang of it, the game can get pretty fun. For those of you who are gamers, it feels like a long version of the first stage in Spore.  I would recommend playing flOw online rather than on the PS4, though.  The controls are too awkward with a PS4 controller, and it’s much much easier to play using a mouse like it was originally intended.

Flower: In a nutshell, Flower is a pretty chill game.  Players control the wind, and you blow a flower petal around a field.  When the flower petal hits another flower, more petals join in and soon you can blow around a TON of flower petals Pocahontas style. These flower petals can do crazy things like make a dead field come to life with vibrant colors!

That’s…pretty much it. There are six levels which take about 20 minutes each to beat.   It’s a cute, happy little game.  It makes you want to frolic in field of flowers and stop pollution, especially in urban environments.  I will say the controls on the PS4 are much better compared to flOw, so you can give this game to non-gamers and little kids.

Journey:  Finally, we’re going to talk about my favorite of the three games in this collector’s edition!  Like the other two games, players are thrown into the game without any background story and a simple tutorial.

You play as a cloaked figure who appears in the middle of a vast desert.  Up ahead is this giant mountain, and even though the game doesn’t tell you WHY you want to go to it, you naturally want to make your way through the desert towards this mountain.  As you start walking around, you will be granted a magic scarf. It looks like this:

As you can see, the scarf has glowing symbols on it. Basically, those symbols represent how many times your character can jump/fly, and the symbols will stop glowing once you have used that power.  Players have to get creative when exploring obstacles because of this limitation, which makes the game fun and interesting.  The only other thing players can do is hit the O button, which makes the character “sing” a note (it’s not quite singing, but it’s the best way I can describe it…).  This “singing” is your only way of communicating with other players in the game AND it affects the world you are exploring.  There are absolutely no words used in this game; players cannot even talk to each other on a microphone when playing together.  It makes the game feel incredibly intimate even though you are playing with a complete stranger and you can’t use any words.  Players have to help one another complete the journey up the mountain; one way the game ensures this is if players remain physically close to one another, their scarves will charge up.

The game is set up to be nonlinear.  The first time I played through the game, I went straight for the mountain and it took me about an hour to beat the game..  The second, third, and so on, I took more time to explore the desert and other levels because I actually knew what I was doing.  Overall, it’ll take players about 2-3 hours to beat, but you’ll want to replay it over and over again.  Journey made me so emotional that I actually started to tear up!  I mean, look at that sunset…

The educational benefits of Journey: Okay, here’s the best part about Journey. I think this game is one of the top video games that can be used in classrooms, school libraries, or public libraries.  The reason why is because Journey at its core is a playable version of The Hero’s Journey.  You know, the idea that every story is the same old story?  Watch this YouTube video explanation, because I couldn’t have said it better myself.

Teachers and librarians could use Journey to teach The Hero’s Journey to middle and high school students. The game isn’t that long, only an hour if you speed right through it, which students probably will be able to do as they play through for the first time. I know, I know, there are some problems with this idea in terms of access.  One obstacle is how not all classes are an hour long, and you need access to a TV, PS4, and the game, but I feel like there’s a lot of potential here!  In fact, I’m going to try it out as a program in the Fall/Winter, where I’ll have teens identify all twelve stages on a worksheet as one volunteer plays through the game.  I’ll let you know how it goes.

Verdict:  Journey has all the right elements to make it a staple in the gaming industry: breath taking graphics, an excellent soundtrack, an intimate feeling when playing with other players, and a strong emotional response.  I highly recommend this title for circulating library collections, as well as teachers/librarians trying to use it for programs!