I have to confess right off the bat that I have never played a Ratchet and Clank game before.  Somehow, this game never appeared on my radar!  Therefore, my review and opinions are formulated on this game alone, and may not be the only review you want to read. I highly recommend reading Wired, Kotaku, and IGN if you want to read reviews written by gamers who are more familiarized with the series.  This game is the rebooted version of the very first Ratchet and Clank game that came out 14 years ago on the PS2.

There’s a movie too: Yep, there is a movie with the same title in theaters near you!  The movie and game go hand in hand.  According to Wired’s review, some of the plot and characters were changed in order to adapt to the film, but the overarching story remains the same.  Also, Sylvester Freaking Stallone is one of the voice actors, along with John Goodman.  I haven’t seen the movie yet because I wanted to beat the game first!

Storyline:  The storyline is reminiscent of many superhero movies. The protagonist, Ratchet, is a fox-like mechanic who wants to become a Galactic Ranger.  Ratchet attends tryouts to be a Galactic Ranger but he is denied due to his background check.  While going home after tryouts, he witnesses a crash landing and manages to save a robot defect named Clank. Thus the dynamic duo is born.  There is an evil politician who is trying to spark an intergalactic war with warbots, and it’s up to Ratchet and Clank to save the galaxy.  In a weird way, the game reminds me of Guardians of the Galaxy because you have a weapon savvy anthropomorphic character, space battles, and silly overtones. 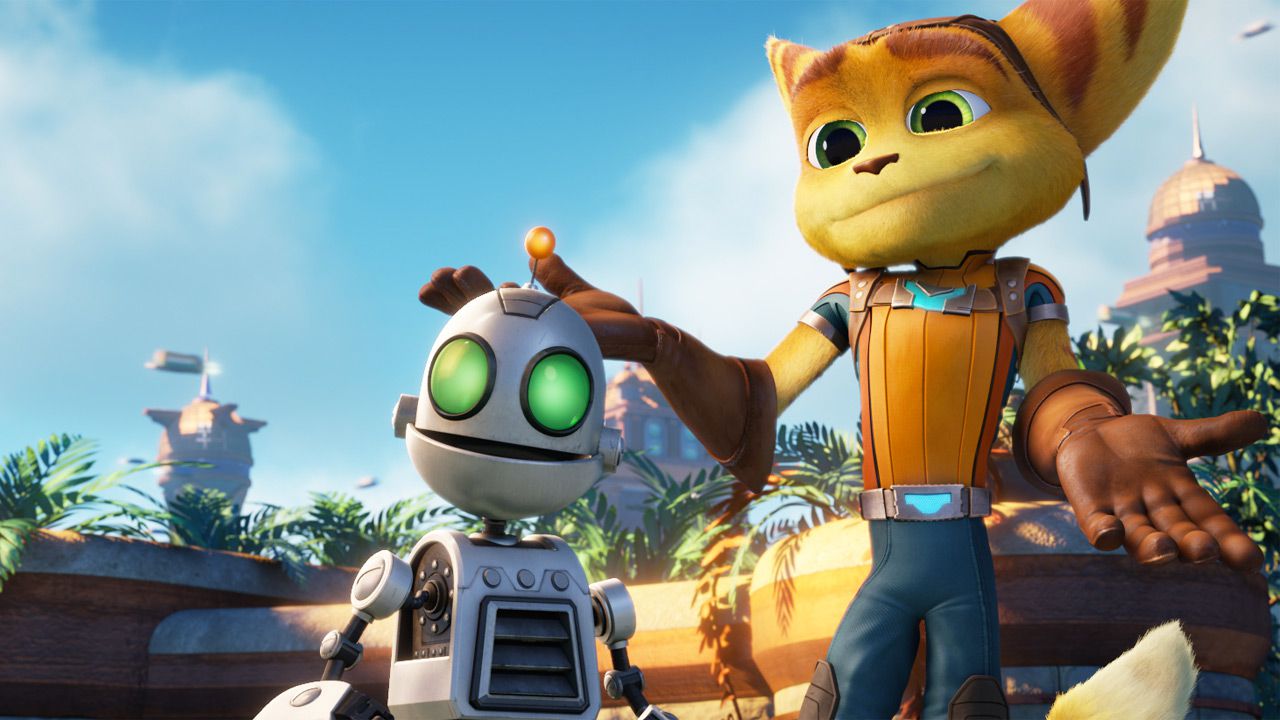 Gameplay:  The game is a combination of adventure, shooter, and puzzle genres.  Players control Ratchet with a third-person view, while Clank rides on Ratchet’s back.  Ratchet can use a variety of weapons to kill enemies like the “Groovitron”, which distracts enemies with the power of disco (see what I mean about silly overtones?).  The game is full of preposterously named weapons and characters, which makes the game extremely likeable.

As players progress through the story, they can unlock weapon upgrades, armor upgrades, and side-quests.  The story takes place on multiple planets, and players can choose to complete every side-quest on a planet before progressing in the story, or they can leave the side-quests for later.  The main story mode is relatively short, only about 12 hours or so of gameplay.  Usually, games that are storyline focused are about 40 hours long, but there are many, many side-quests to keep players entertained.

Art Style: I just want to point out that the art style is beautiful.  A lot of money was invested in upgrading the game’s artwork and graphic design, and I believe it really paid off.  Take a look at a comparison here: https://i.ytimg.com/vi/abSN25NJa-I/maxresdefault.jpg

Audience:  I think this game is great for all ages.  It is a great selection especially for kids because it’s a shooting game that isn’t overly violent, it’s funny, and players can select their difficulty before playing the game.  As for teens, I think they would enjoy it because it’s one of those “classic” game series that has persevered over the years but doesn’t have a large mainstream presence (that is, until the movie comes out).

The new movie and new game also have programing opportunities, like having a movie night for teen gamers, or playing the movie in the background at Teen Game Night programs.