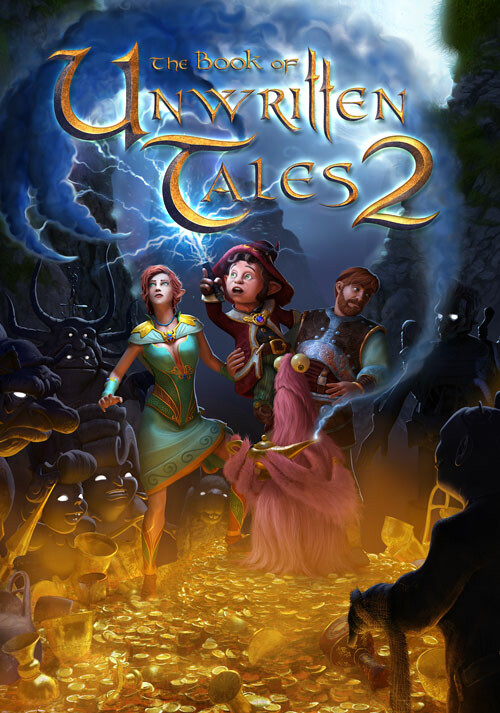 Background: Book of Unwritten Tales was released solely on PC in 2009 in Germany, then later in the UK and US. The game was so popular that a fan base formed, which inspired the company to make a sequel. The Book of Unwritten Tales 2 project was greenlit, but they did a Kickstarter fundraiser to make the game “better”. They wanted to add better music, voice acting, and details to make the game great. It was fully funded with $170k in donations!

Rated: T. Keep in mind this game is made by a German company, and it is well known that US media and ratings have different standards compared to European media.

Storyline: The Book of Unwritten Tales takes place in a fantasy world where war is raging between humans, elves, gnomes, and dwarves and there is also an hidden artifact that determines the fate of the world. Naturally, the world is saved, and all of the characters head home. In The Book of Unwritten Tales 2, the story picks up after the war is over, and Ivo the Elf finds herself pregnant. She is unsure how she got pregnant (cue many other characters uncomfortably refuse to tell her what “sex” is), so she sets out to figure out if it’s a curse or not. The game sounds silly because it is meant to silly. It makes plenty of pop culture references like Lord of the Rings, Temple of Doom, Game of Thrones, Harry Potter, and other geektastic things. If you take a look at the image below, you’ll see what I mean. The game’s genre is technically “point and click adventure” because that is how you play the game, but another word I would describe the series is a puzzle/adventure game. You play as different characters: Ivo the Elf, a gnome wizard named Wilbur, and Nate the sarcastic human. Each character is well developed; they have distinct personality traits with plenty of humor to spare. Each character has their own problem in the narrative to solve, and the plot advances as players solve puzzles in each scene.

Game Play: In order to solve puzzles, players look at the scene in the game, and use the pointer to “click” on objects in the scene. This is not a typical puzzle like a crossword puzzle; think of it more like blend of “Where’s Waldo” and hide-and-seek.   Players have to figure out how to manipulate objects in exactly the right order in order to progress forward, and players use clues in order to figure out the order. The annoying this is the text is written in pinks and greens, so it’s hard to read unless you’re sitting really close to the TV. In concept, the game play is simple, but there is a HUGE difference between playing this game on a PC compared to playing it a console. Remember how I said this game is “point and click”? Well, that doesn’t translate well because you can’t *click* with a mouse when you’re playing on PS4! When you play with a controller, there are two ways to interact with an object in a scene. The first way is to physically move your character up to an object. It’s not as smooth as you think it is, because the characters walk slowly and they have to be perfectly aligned with the object in order to look at it or do something to it. There are many awkward seconds where the character has to realign their body in order to perfectly line up with the object, and it really slows the pacing of the game. If you take a look at the tutorial here, you can watch how this is awkward.

The second way is pressing a button, which reveals all of the interactable objects in a scene. This was my preferred way to play the game, but even then it’s still a tedious process. If you want to interact with an object, say on the left side of the screen, you have to scroll all the way through the other objects in order to get to it. Again, this slows the pacing of the game, and frankly, it’s frustrating! Verdict: Don’t bother purchasing this game for consoles. The game is frustrating to play with a controller instead of a keyboard, which is a shame because it has a beautiful design, interesting game play, and great characters. Gamers who really want to play The Book of Unwritten Tales 2 will probably play it on their PC just like they did for the first one anyways.