Gameplay: If you have all instruments and a singer, the screen looks like this: 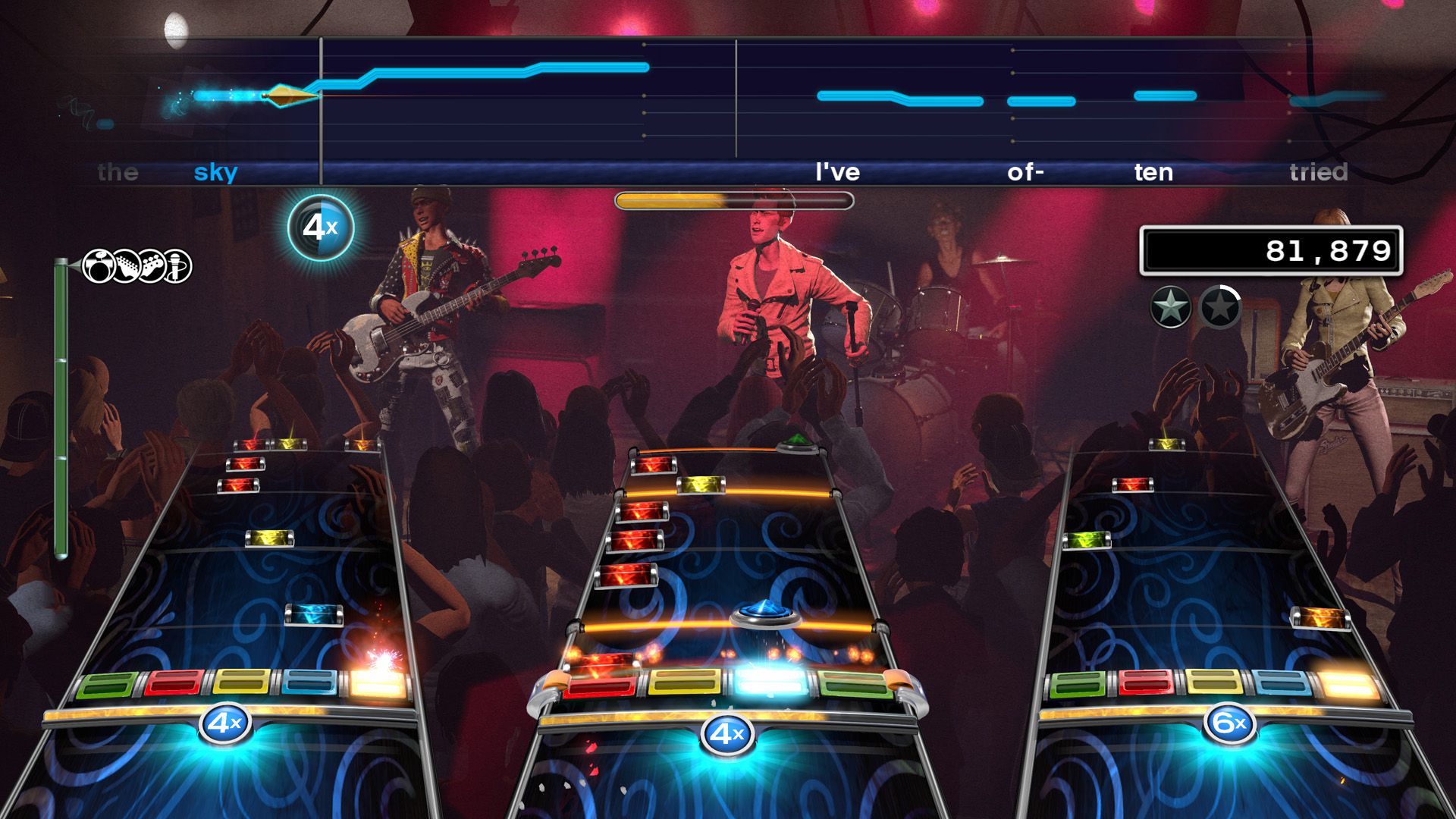 Each instrument has a section, so players only have to look at their designated section to figure out what notes they have to hit. The guitar is on the left or right side(depending on if you have a bass player), the drums are in the middle, and the microphone is always on top of the screen. On the very left-hand side, you’ll see a green bar. That green bar measures your band’s accuracy. The more notes you miss, the more the green bar will slowly change to red. If you miss too many notes, you will get booed off the stage! If you get booed too many times, players can simple change their difficulty to make it easier to get cheers than boos.

Drum Kit: With the basic drum kit, there are four colored pads that players hit with drum sticks. You can add cymbals from their previous Rock Band drum kit, but our library decided not to. There is also a foot pedal, which players need to hit when an orange bar appears on the screen.

Microphone: There can be up to three singers at once, but they collectively share one score at the end of the song. The lyrics are displayed on the screen, with bars to show what note players should sing.

What’s different? There are subtle changes compared to previous versions of Rock Band 4. One thing is the controllers are now all wireless except for the microphone, which makes it a helluva lot easier to store the drum kit in a closet when not in use.

They also changed the way solos can be played on guitar. Players have the option to freestyle their own solos, or they can play the solo as it was meant to be played. This is nice because it can be very difficult to nail fast solos if you have to play specific notes! Instead, you can opt to button mash whatever you want, which of course, makes you feel like a rockstar.

Players can also create a band and go on tour. Each player can choose what their character will look like and what kind of show they want to play. What’s different is the band has to choose between “big style”, “big fans”, or “big money”. Depending on what you select, you can play through Rock Band 4 many times in different cities, venues, and crowds.

Teen Game Night: The most popular choice for teens is to select “Quick Play”, which means players can play any song they like. The game comes with 65 songs, and they swapped out some classics for more recent songs like “Uptown Funk”. Get ready to listen to “Uptown Funk” over and over again, because teens *love* it. I try to challenge them to play songs they have never heard before, so that way my head doesn’t explode from Bruno Mars.

What is great about Rock Band 4 is it is easy to get teens who don’t know each other to interact. We tend to get groups of teens who go to different schools in our area, and it can be challenging for me to get one group to talk to another group. I have found that Rock Band 4 breaks down those barriers because listening to music is something that all teens have in common. If a teen sees a song they love, they’ll definitely ask to play next or sing along in the background. It’s great to see how the power of music can bring people together <3