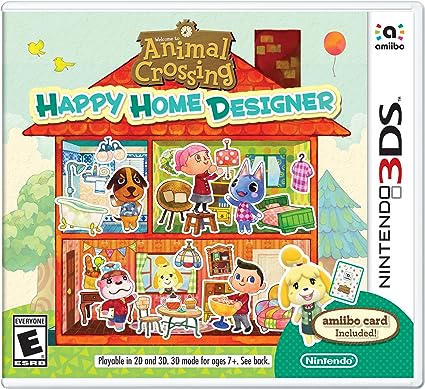 For those of you who don’t know much about Animal Crossing, it is a simulation game that first came out in 2002 for the Nintendo GameCube. Since then, Nintendo has created other versions of Animal Crossing, although the gameplay has essentially stayed the same. In Animal Crossing, your character lives in a remote village with other animals, each with their own personality. The player can do many things like plant trees, go fishing, find fossils, decorate and upgrade their house, and complete tasks for the villagers. The game is played in real time, which means that when you’re playing at 11:00 PM on October 1st, it is 11:00 PM on October 1st in the game. Different things happen at different times of the day or year, like holiday celebrations. Or, another example is you can only catch a rare type of fish in the morning. Players cannot beat Animal Crossing, which gives it an advantage because players can pick up where they left off years later and still have the same amount of fun.

Rated: E for “Everyone”

Quick Synopsis: In the beginning, I talked about how the gameplay in the newer versions of Animal Crossing essentially remained the same. Well, Happy Home Designer is the first in the Animal Crossing series to divert from the core gameplay, and not for the better. The game starts off with the player creating a character and unlike previous versions, players have complete control over how their character looks. Side note: players can now choose their skin tone instead of defaulting to a white skin tone. Once you are done creating a character, you arrive at Nook’s Homes, where you will be working as a designer. Sadly, you do not live in a house in a village.

You meet Lottie, who is a new character in the Animal Crossing world. Her purpose is to teach you how to play the game and unlock new features from designing homes. Once you learn the controls, you set out into the world to design homes for villagers and public buildings. The game is no longer in real time. Instead, you can design one home a day and then end the day by writing in your journal.

Designing Homes: Outside of Nook’s Homes are many villagers who want you to design a new home for them (there’s a grand total of 300 villagers in the game). Players use the joystick to walk around, press the A button to talk to villagers, or press B to exit the conversation. Once you decide which villager’s home you want to design, you choose the location, size, and number of rooms. Each villager has a “vision” for their home, and typically require two or three specific pieces of furniture. I should mention that I have yet to see any new furniture/themes that have not appeared in previous games, which is disappointing. However, what IS satisfying is you don’t have to work your butt off to find every piece of furniture in a themed set, or a rare set. In previous games, it would take months just to find all 11 pieces in the same furniture set. This game lets you unlock full sets at a time, which is insanely satisfying for someone like me who spent a little too much time selling their soul to Tom Nook for a coveted piece of furniture. 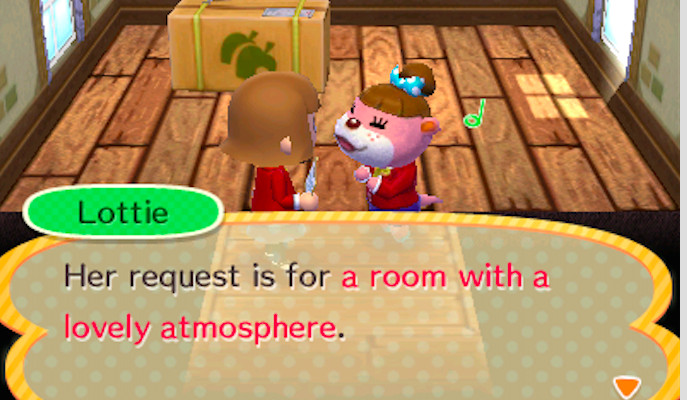 Players use the bottom LCD screen to select and drag items into the lot. The inventory system is much easier to use than in previous versions because it is organized by item type! Players can customize the exterior colors, architecture, outdoor decorations, and fence. Inside, players can customize the wallpaper, floor, furniture, windows, lights, art, and background sounds.   Designing rooms is much easier than in previous Animal Crossing games, and encourages players to exercise their creativity. The grid is much more refined (meaning you can put an object halfway in between something that is two squares, like a candle in the middle of a table), and characters can squeeze in between furniture instead of needing a full square of space to move around. Also, rotating furniture is much easier to do because you can use the stylus to move furniture instead of having your character push it around.

Players can unlock more customized design options (like ceiling lights) by using Play Coins. A quick side note, Play Coins are collected either by purchasing them with real money, or walking around with their 3DS closed. Every 3DS has a pedometer, so every 100 steps gives you a Play Coin, but caps off at 10 coins per day. In order to unlock everything in Happy Home Designer, you need less than 100 Play Coins.

Players can use the cross button to change their view inside the home. You can also pick up their character and move them around anywhere in the home, which prevents your character from getting stuck behind a bunch of furniture. When you are done designing, you speak to the villager. Your design is accepted only if you have the required pieces of furniture, which is a shame because it doesn’t feel satisfying when you finish a design.

Designing Public Buildings: Inside Nook’s Homes, you can talk to Digby to design large public buildings in New Town. In my New Town, I have a hospital, coffee shop, school, and a store. Once you are done designing these buildings, you can unlock more public buildings. http://www.crystal-dreams.us/wp-content/uploads/2015/06/oldtown.png

Happy Home Network: Players have the option of posting their designs on the online “Happy Home Network”. Each home is given a code that you can give to your friends if you want them to view/rank your home. Other players can rate your home design on a scale of 1-3 in different categories. This is the only way players can get any feedback on their design, since the game itself does not give you a score. You can also participate in competitions and win rewards that unlock more content.

Amiibo: In order to use an Amiibo for the 3DS, you need to purchase an Amiibo adaptor, which costs about $15-$20. Instead of using figurines, Happy Home Designer has special Amiibo cards that you can use to unlock certain villagers. This is for the people who are emotionally attached to a villager from previous games (for me, it’s Roald <3).

STEM Appeal: There are many missed STEM opportunities in this game, which is unfortunate. For example, the game could have given you a monetary budget for a house, which would challenge players to use their math skills to figure out what the villager needs and what they can afford. Instead, the game lets you design without any limits except what is available in the catalog and what is required by the villager, and that just doesn’t feel satisfying enough.

Verdict: I would not recommend buying this game for a library collection. The reason why is Happy Home Academy is a circulation nightmare. The game is saved on the physical game cartridge that would get checked out, so theoretically, patrons would have to restart the game every time they borrow it OR continue the previous patron’s game. I THINK there is a way to save games onto an SD card, but your patrons have to be tech savvy to know how to do it.

Second, Happy Home Designer is nowhere near as fun as its predecessors, because it feels more like a upgraded version of one aspect in previous Animal Crossing games. The game gets boring after a few hours because you take about five to ten minutes to design a home, rinse and repeat. That being said, I certainly don’t regret buying the game for myself because I’m a long time Animal Crossing fan and I hope my designs can be used in future Animal Crossing games!

In short, there’s no way the game is worth $50, so save your money!