Doctor Who: The Best of Series Two (according to Maria and Sherry, at least!)

As part of my Doctor Who Week extravaganza, I invited my friend Sherry to chat with me about our favorite episodes from each year since Doctor Who restarted in 2005. My thoughts will be in regular text and Sherry’s in italics. Enjoy!
Visit our Series One post, where we discuss our favorite Eccleston episodes.

Series Two:
I had a really hard time accepting David as the Doctor – for about the first thirty minutes. I still identify Eccleston as “my Doctor”, but Tennant is an artist who plays an amazing Doctor. I fell in love with him pretty darned quickly. How can you NOT love that quirky grin and disheveled hair? My younger son declares that Tennant is HIS Doctor – and dressed up as him for Halloween. So cute!
Sherry:  I too thought there was no way I could enjoy someone else playing the role of the Doctor after Eccleston but I was sorely wrong.  I fell in love with David Tennant and he became “my Doctor” (sorry 9, it must have only been puppy love!) during his debut episode, The Christmas Invasion.  From the very beginning it was apparent his humor and confidence would be the mainstays of his character.
So, can we narrow this year’s episodes down to just a few favorites this time?
Tooth and Claw
This episode has some of the BEST quotes! As a bibliophile, can you resist Tennant calling books the “best weapon”? Or how about the adorable bet between Rose and Ten, as they try to get the Queen to say, “I am not amused”? Then there is the in-joke to rule all in-jokes when the latest royal baby was born during a full moon. I KNEW they were all werewolves! I went hunting for gifs from this episode to include in my post and ended up with a huge grin on my face.

I’m an old school Buffy fan, so it’s not hard to understand what appealed to me from this episode. GILES! Giles, as an EVIL man! Okay, so I do know that it isn’t Giles, but it still made me smile to see him again. Beyond that guest star, the appearance of Sarah Jane was wonderful. I am not a classic Whovian, but I have every intention of going back to watch the heck out of everything she has done. I loved the interactions between Sarah Jane and Rose. Two women who love the Doctor, sharing a chuckle at his expense. Priceless!
SCROLL TO KEEP READING THIS POST

Sherry – Looking back on this episode, I guess I should have picked up on the foreshadowing with the Doctor telling Rose he can’t spend the rest of his life with her…that he has to live on, alone.  Instead, I just found it sad overall as Rose met Sarah Jane, a former companion, whom she had never heard about.  Although they got along together, Rose still had to feel a bit jealous of this “earlier” companion and also wonder whether the Doctor would ever mention her to others in the future.
The Girl in the Fireplace 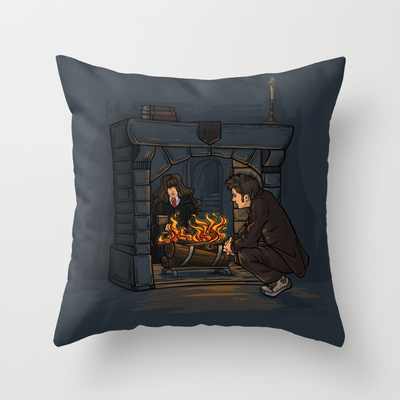 “The Witch in the Fireplace” by Karen Hallion http://society6.com/KarenHallion/The-Witch-in-the-Fireplace_Pillow (Like this? Be sure to check out my post about the cool mashups Karen Hallion does for Doctor Who!)
While many Rose fans don’t like this episode because Ten kisses someone else, I didn’t mind that at all. In fact, the dopey grin he gets after Madame de Pompadour kisses him probably ranks up there as one of my favorite mental images of Ten. He makes the BEST faces, doesn’t he?
Sherry – This is definitely one of my very favorite episodes from season 2.  I adored the character of Reinette and seeing her grow up in this episode, reacting in different ways to the Doctor visiting her. The droids were super creepy and balanced the bittersweetness of this episode for me.
The Impossible Planet/Satan Pit
Sherry – I really liked the delving into religion in this episode mixed with the traditional science fiction of the space ship. “The Pit is open and I am free.”  Shudder.  The Oods and their politically correct politeness were awfully creepy too…especially the possessed ones!
Yes – this was a BEAUTIFUL pair of episodes, and scary too! I loved the “I believe in her” speech. Absolutely perfection from Tennant. He’s a work of art.
[youtube http://www.youtube.com/watch?v=aqlqQsKG94I?rel=0]
And the forehead kisses they tend to share? Priceless.

http://tonakai.tumblr.com/
Doomsday
I thought I could handle it. I mean, I already lost MY Doctor, right? Nope. This one left me weeping like I’d had my heart ripped out of my chest. The idea of their separation was so much worse than any regeneration. And yet.. in spite of the pain… this was an amazing episode.
A tear jerker for sure!  Watching Rose slipping into the vortex and the Doctor not being able to do a thing?  Horrible!  Seeing that instead of dying she actually becomes trapped on alternate Earth thanks to her Dad saving her was surprising.  My heart broke when the Doctor appeared in a hologram to her and we only hear him say “Rose Tyler…”  Sigh.  Was he going to say “I love you”?

What do you love best about this season? 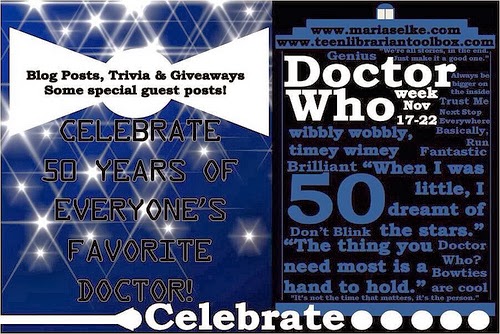